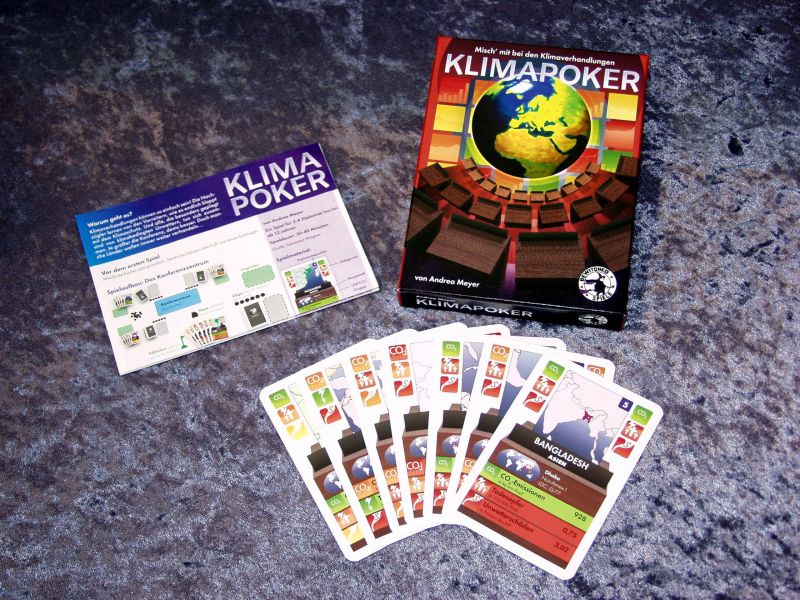 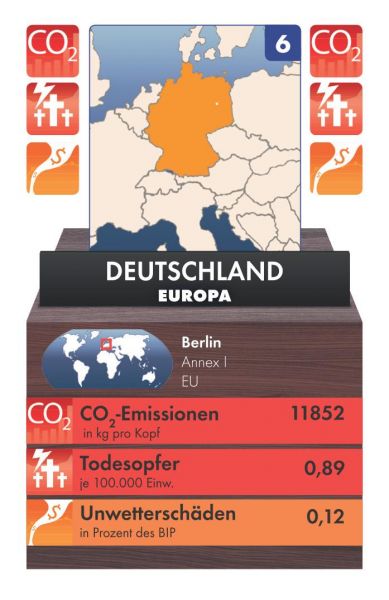 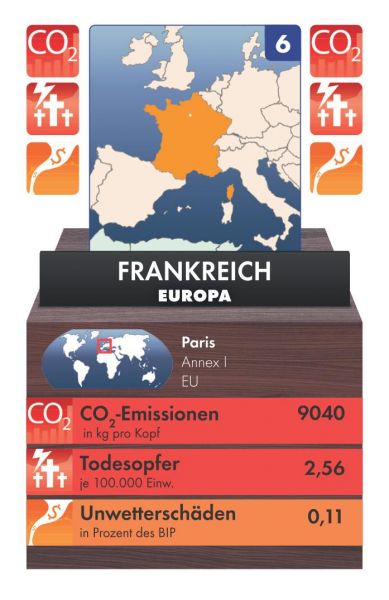 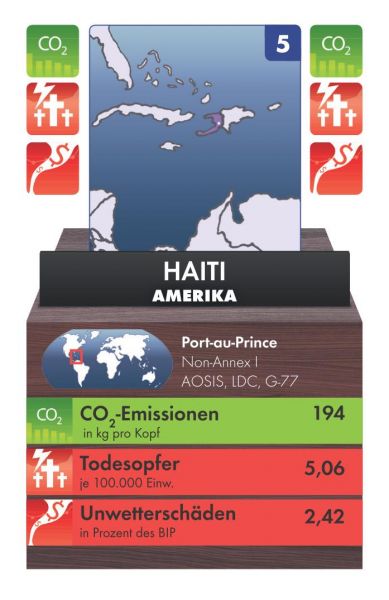 Karin, Felix, Paul, and Maike play Climate-Poker. Each of them received 15 cards which lie on draw piles in their lobbies in front of them Felix, Paul, and Maike have five chips each. Karin is the start player, the flag and the black house stand in front of her, beside her lobby there are six chips. Karin draws the topmost six cards from her lobby into her back room (on her hand), the other draw five cards each.

It is Karin's turn. She says "Sudan" and "CO2-emissions". Felix plays "Canada", Paul holds his card "Togo" face down in front of him, and Maike chooses her card "Haiti". Felix guesses that "Togo" has the lowest CO2-emissions of all countries in the trick.

Everybody flips their cards and compares the CO2-emissions. Paul wins the comparison with Togo. Felix guessed correctly, he decides to take another chip. He now has six chips in front of him.

Karin now has five cards remaining on her hand, three of which belong to the same risk group - namely orange - when it comes to losses: France, Venezuela, and Morocco. She displays them face up in the conference room.

compares the countries' values for losses and then discards the cards of Venezuela and Morocco on the discard pile in her lobby. Both countries have the worst values for losses among the participants of the conference. They are discontent and want to continue negotiating. Then she puts France with the best i.e. lowest value into her airport. The French government delegation is content and travels home. For this card Karin will score six diplomacy points at the end of the game.

Karin draws four cards from her draw pile, Felix draws two, and Maike draws one. Paul has five chips and five cards in his back room (on his hand), he does not draw any cards.

Karin passes the flag on to Felix who now takes his turn. The black house remains in front of her till the end of the game.

Each set of rules is only as good as the creativity of those who write it. We tried to explain all contingencies and anything unclear, however, experience shows that this usually only has limited success. Plus: In general each mistake or missing information in a set of rules will be found sometime. And most probably somebody will try it, for whatever reason.   Hence here is a list of questions on the rules of "Climate-Poker", which will be updated regularly. If you have an open question not answered here yet, email it to info [at] bewitched-spiele.de, you will get an answer asap. THANK YOU!

In the German WWF-magazine as of January 2010 Climate-Poker is recommended. The review states that the game raises awareness for climate change and that players learn how important it is to negotiate well in order to reconcile different interests.

Industrialization of the past 150 years increased the concentration of greenhouse gases in the atmosphere too much. The atmosphere heats up, temperatures and the sea-level rise. Until 2100 experts expect the average global temperature to increase by 1.4 °C to 5.8 °C and the sea-level by 10 -90 cm. Today climate change is already one of the major reasons for natural catastrophes like floods and droughts.

The International Panel on Climate Change (IPCC), also called World Climate Council, recommends stopping the rise of the global average temperature at a maximum of 2 °C as compared to the pre-industrialization level in order to avoid unacceptable consequences and risks of climate change. In the year 2100 each of the roughly 9 billion people on earth will be allowed to emit about 1,000 kg CO2 if we want to limit the increase of the average global temperature to 2° Celsius. To get there, energy efficiency must be improved and the use of renewable energies must be extended.

At the Earth Summit in Rio 1992 the global United Nations Framework Convention on Climate Change (UNFCCC) was adopted. The 192 member states belong to Annex I (mainly industrialized countries)or Non-Annex I (mainly developing countries) of the convention. In 1997 the members agreed on legally binding commitments to reduce GHG emissions in Kyoto in Japan. The Kyoto-Protocol entered into force in 2005: Industrial nations listed in Annex B of the protocol shall reduce their emissions as a group by 5% in 2008 -2012 as compared to 1990.
However, many industrialised countries are lagging behind their reduction goals.The USA even declared their withdrawal from the Kyoto-Protocol. In Copenhagen 2009 a new climate protocol shall be agreed on. In 2005 about 19.5% of the world population lived in Annex I-countries. They were responsible for 52% of the CO2-emissions. The average CO2-emissions per capita in the world in 2005 were 5.5 tons. In the Annex I-countries the average emission was 14 t per capita, in the Non- Annex-I-countries it was 3.2 t per capita.

At the 14 international conferences unnder the climate framework convention, the so-called COPs, several thousand people from all countries of the earth struggled for common climate change efforts. At the conferences there are fixed and shorttime alliances and coalitions among countries. The EU-countries speak with one voice, many non-EU industrial countries joined the so-called “Umbrella-Group“. Switzerland, Mexico and South Korea founded the Environmental Integrity Group EIG.
The biggest group at the conferences, however, is the “Group of 77“ resp. G-77, a group of so far more than 130 developing countries. Within the G -77 there are the „Alliance of Small Island States“ (AOSIS), and the group of Least Developed Countries (LDC). 43 countries are members of AOSIS, they (will) suffer especially from a rising sea-level. Other fixed groups at the climate conferences are the Organization of Petroleum Exporting Countries (OPEC) and the „African Group“.

The non-governmental environment and development organization Germanwatch regularly calculates a risk index of climate change (CRI) based on data from the reinsurance company Munich Re. The index bases on the death toll and losses from natural catastrophes in the past, the population and the GNP of countries. Catastrophes such as tsunamis, earthquakes and volcanic eruptions that are independent of the weather are not considered. Climate change promotes the number and intensity of heat waves, droughts, floods , storms etc. Hence the categories “Deaths per 100,000 inhabitants” and “Losses per GNP in %” show how much a country has suffered from the consequences of extreme weather (and thus indirectly of climate change) between 1998 and 2007 already.
Munich Re's NatCatSERVICE uses different sources in order to determine the number of deaths following extreme weathers. Among them are governmental information, but also details from Non-governmental organizations, caritative organizations, the International Red Cross etc. As far as the total and the insured losses are concerned, NatCatSERVICE has access to global information provided by insurance industry. Non-insured losses are determined based on official information. For the game losses of 0.00% in countries that had death victims due to extreme weathers were rounded up to 0.01%.

Countries in the game

For Climate-Poker 60 countries were chosen which represent a wide variety of values in the different categories. The 180 countries for which the CRI 2009 shows the relevant values had averagely 0.52 deaths per 100,000 inhabitants between 1998 and 2007 due to climate-induced storms etc. The average losses in these countries were 0.67 % of their GNP. However, Grenada, for example, lost about 19% of its GNP due to the hurricane “Ivan” alone.